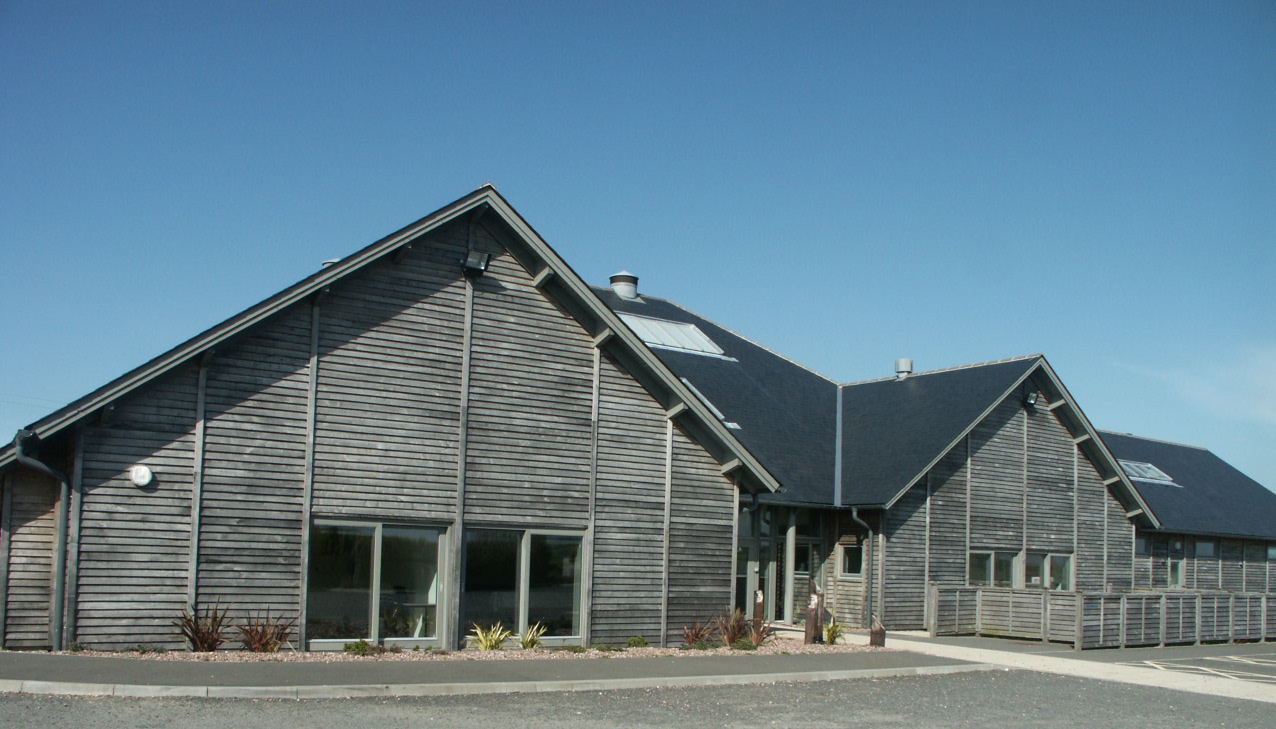 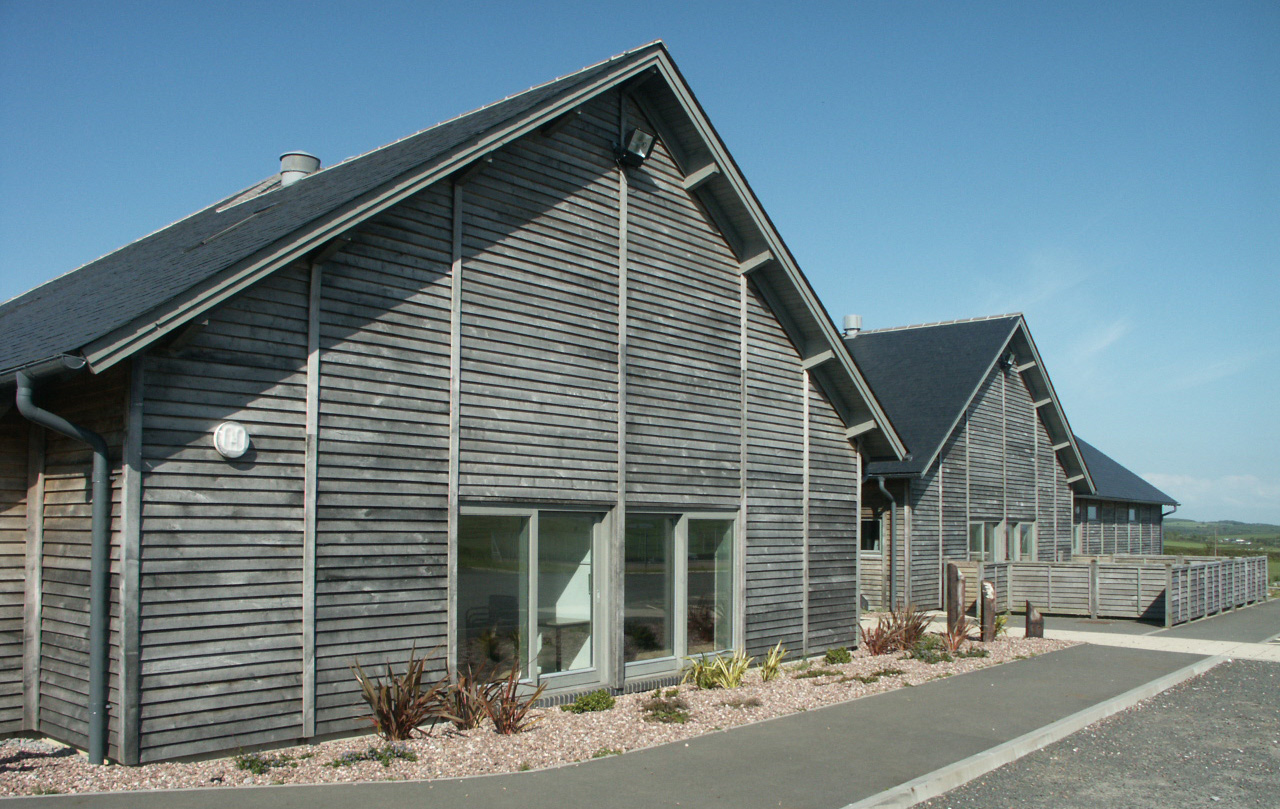 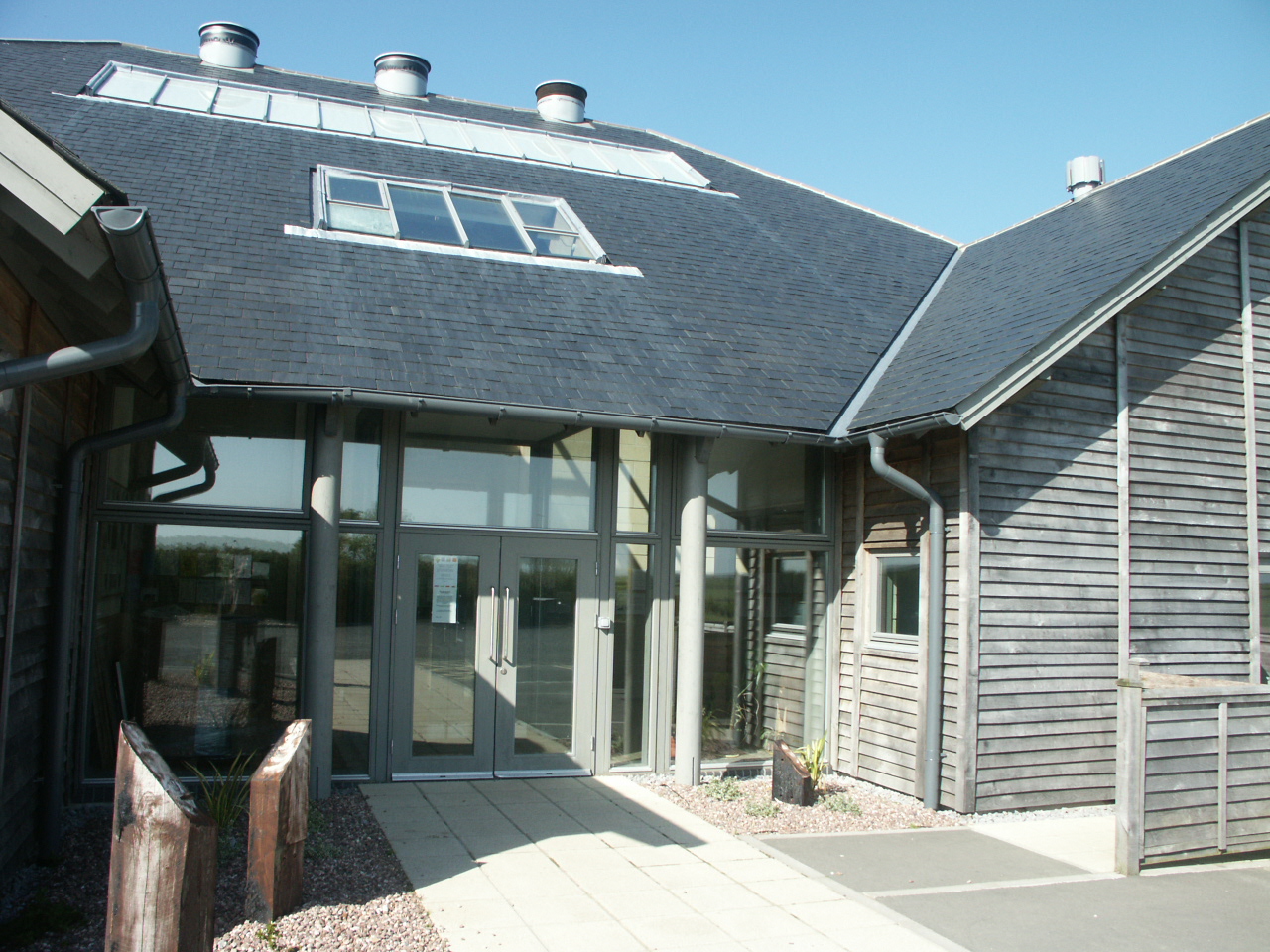 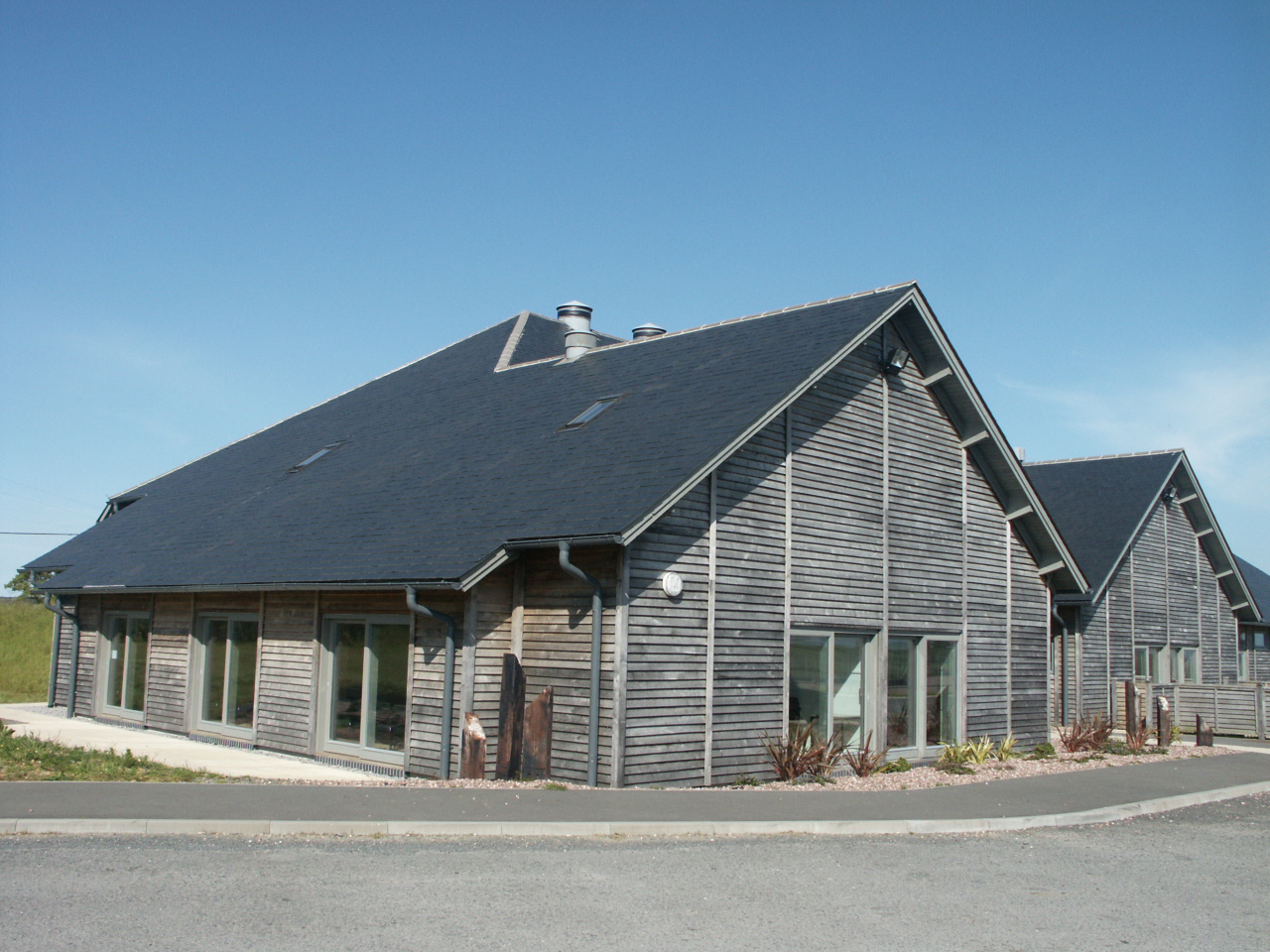 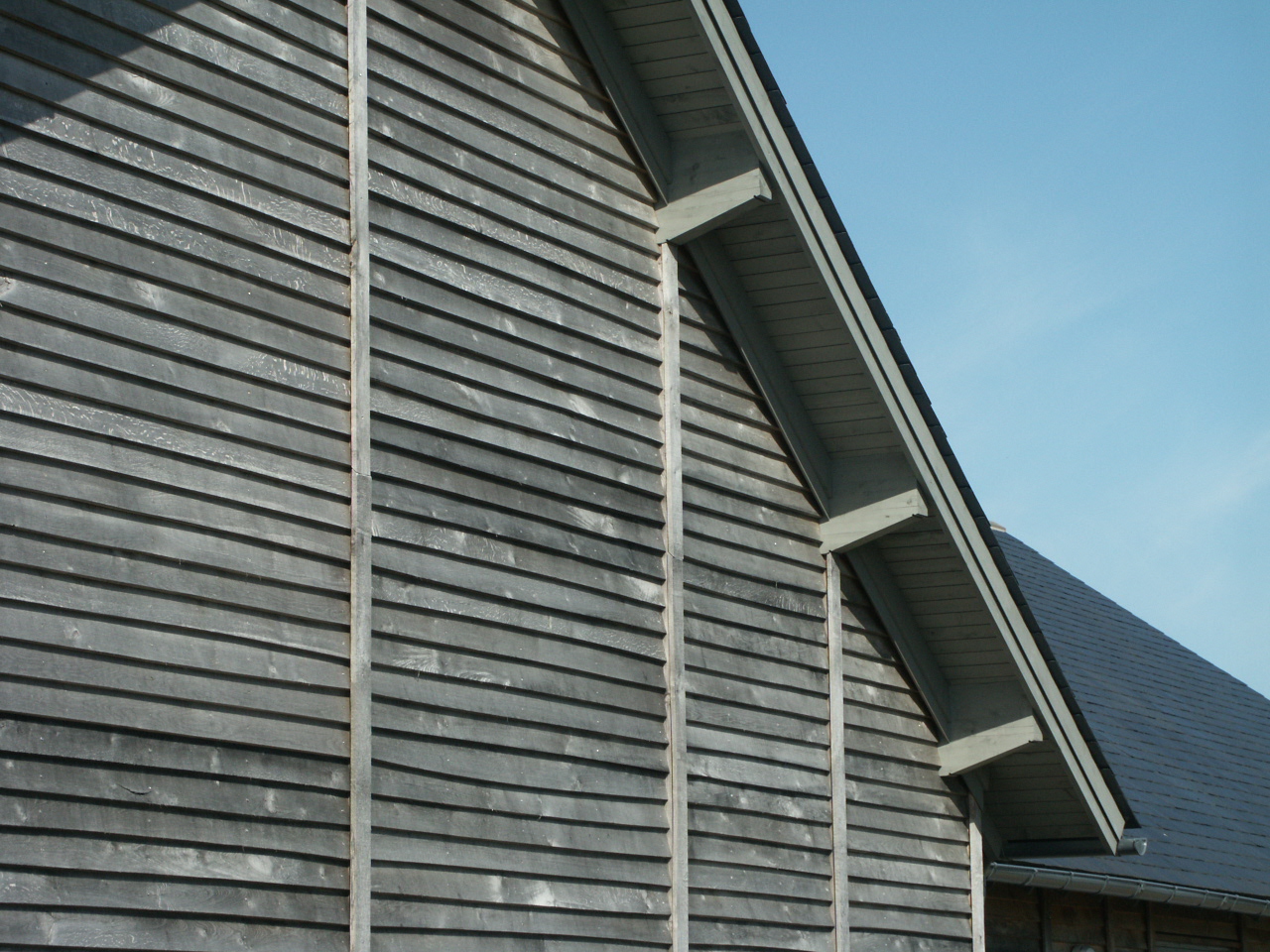 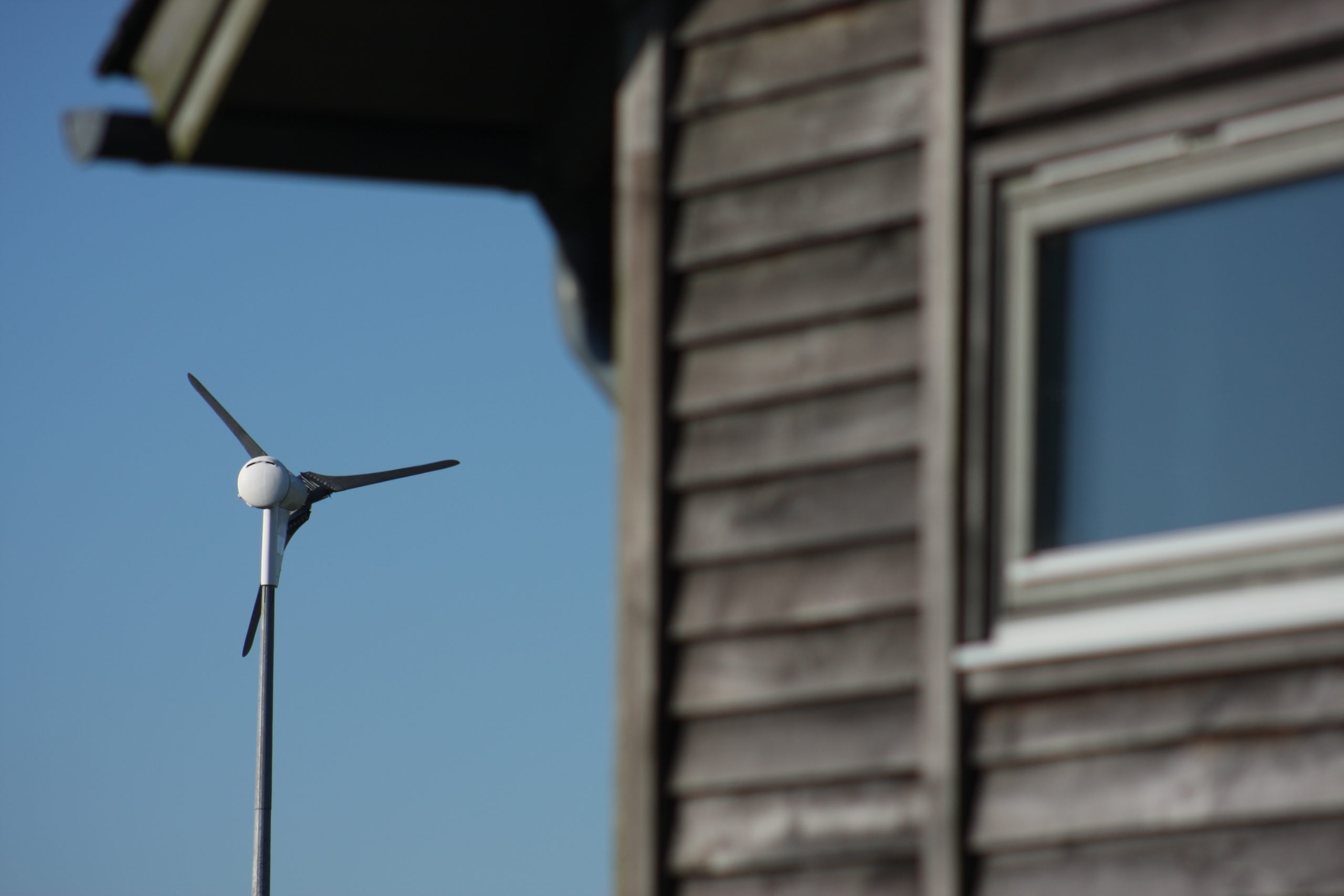 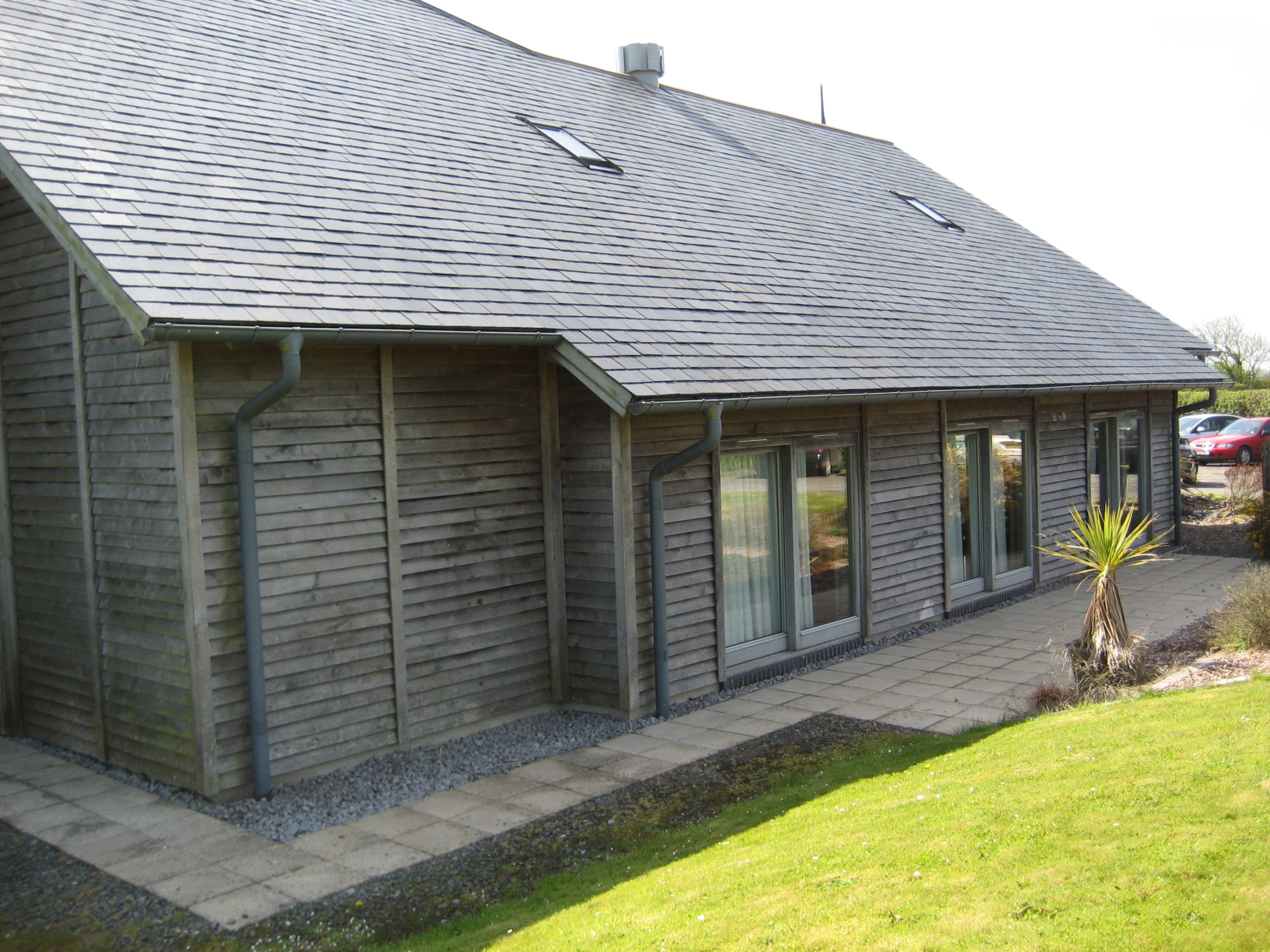 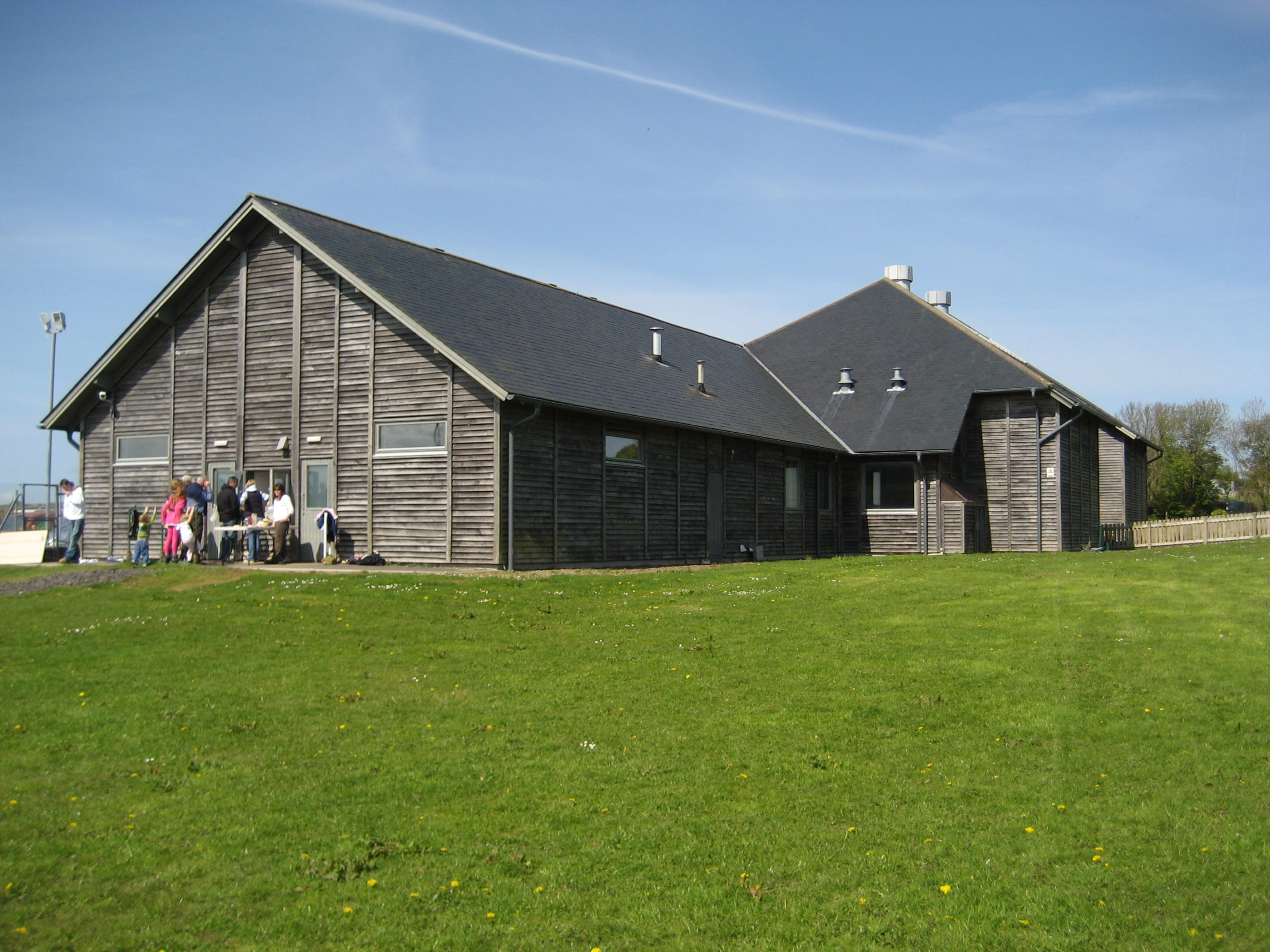 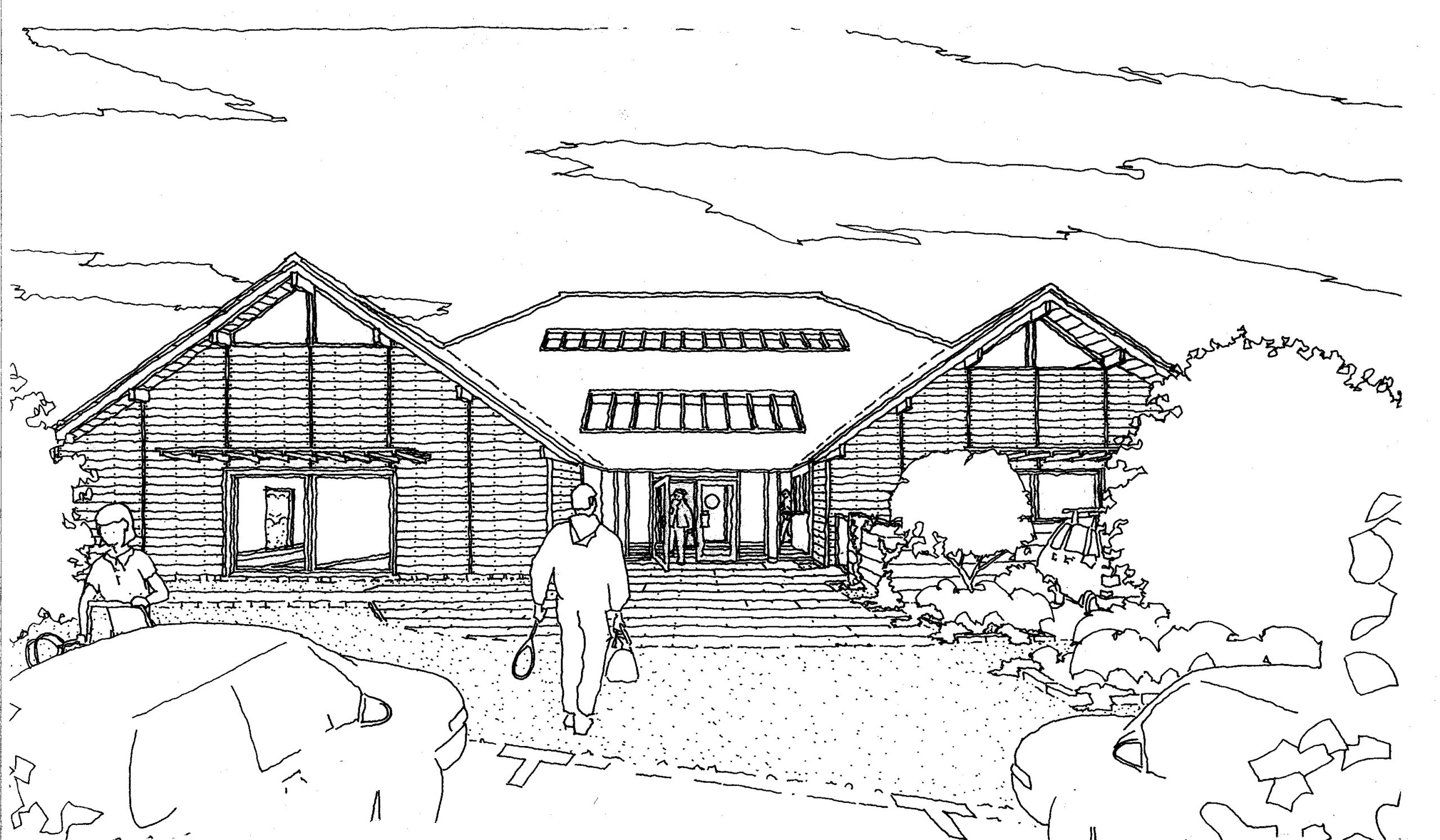 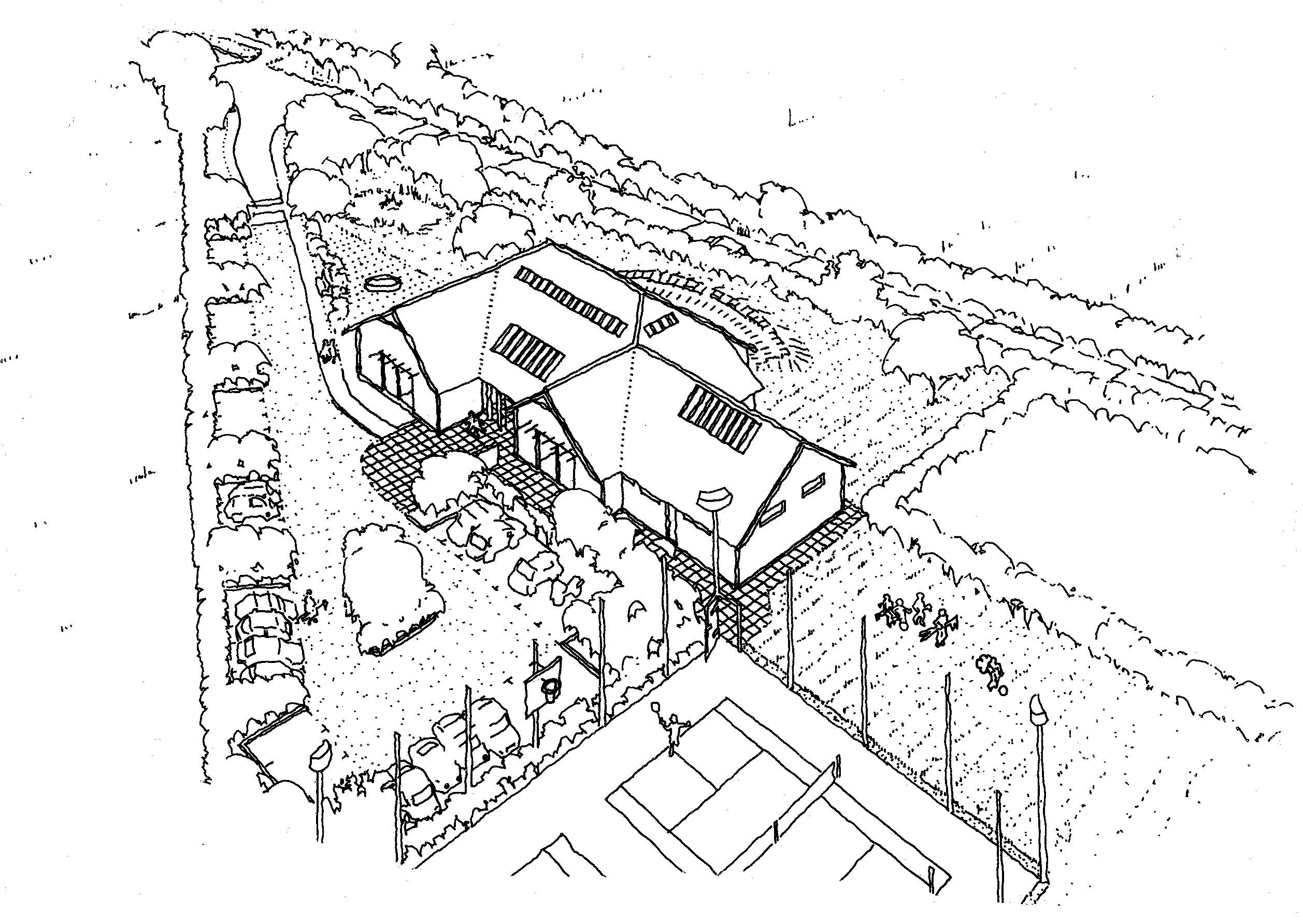 Receiving National acclaim in a number of awards including winning the Civic Trust ‘Special Award’ 2003, the hall at Woolsery has been recognised as one of the best examples in the country of rural community initiated sustainable public buildings.

The building reflects the importance of the building being at the heart of the community, in a way that the church had provided in previous centuries.

The landscape has been carefully designed in this exposed coastal location to protect the building from cold north easterly winds via the building orientation, internal layout and creation of an amphitheatre using spoil from the building.

Since its completion in 2001 the Woolsery Sports and Community Hall has become the focus of community life. The low energy design has enabled community groups to thrive, since the running costs are less than £1 per day. The building generates more energy than it uses, and the community receives an income from selling electricity back to the grid.

Over the years, renewable energies have been added to the building including photovoltaics, wind turbine and a ground source heat pump; a passive ground-cooled cool-larder has been added to the project. An extension has also been built designed by Gale & Snowden, which is compatible with the original ethos of the project.

In 1997 members of Woolsery Parish were looking to the future planning a new community hall that would reflect their desire to care for the natural environment as well as to provide state-of-the-art facilities for generations to come. Woolsery’s new hall sets a precedent for community-based designs.

The Sports and Community Hall at Woolsery has been recognised as one of the best examples in the country of rural, community-initiated, sustainable public buildings The energy and water consumption of the hall has been monitored since it was completed in 2001, using 25% of the energy and water consumed by a similar ‘good’ energy efficient building, built at that time.

This project involved community participative design using ‘planning for real’ techniques and involving the community throughout the project. Over 30 different groups now regularly use the hall covering all age groups from toddlers to the over 60s. Sports activities have been developed with junior groups for football, netball, badminton and tennis and snooker. The hall will continue to be the focus of village developments and activity for the foreseeable future.

A proven commitment from the community, together with this highly innovative and ecological design, attracted substantial funding from Sport England who expressed special interest in the exemplary features of the design. Sport England Lottery Funding provided 84% of the funds for the project. The remainder was from the Local Authority & Community Council of Devon, Football Association, Foundation for Sport & The Arts, Torridge Leader, charitable trusts and funds raised by the Parish Council and the community.

The flexible design incorporates multi-functional spaces such that the hall can be converted easily into a theatre, cinema and sports hall. A bowls alley, snooker room, meeting spaces, crèche, gym/fitness facilities, changing and storage areas are all included. The original design allowed for a future extension which has now been implemented.

The community has been very heavily involved in the whole project from day one, making the community feel a strong sense of ‘ownership’. Over 30 different groups now regularly use the hall – some daily, such as Play Unit, some two or three times a week, e.g. bowls, some weekly, such as the Wednesday Club, and some monthly such as the Woolsery Society. All age groups use the hall, from toddlers to the over 60s. Sports activities have been developed with junior groups for football, netball, badminton, tennis and snooker. These are coached and encouraged by adult members of the community who also help with cubs, brownies, etc. The hall will continue to be the focus of village development and activity for the foreseeable future. 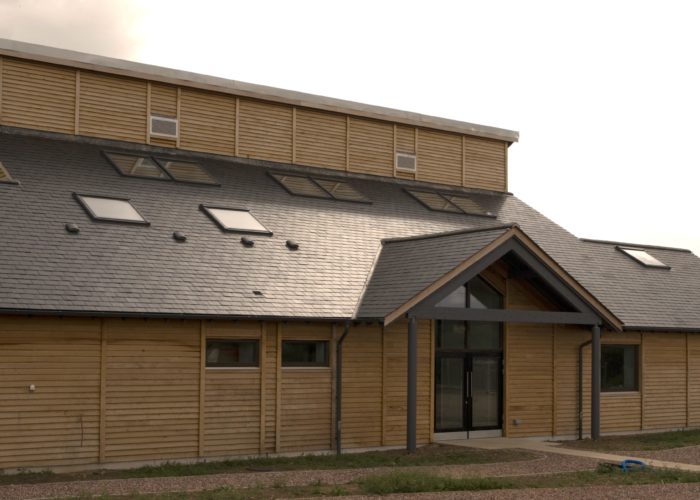 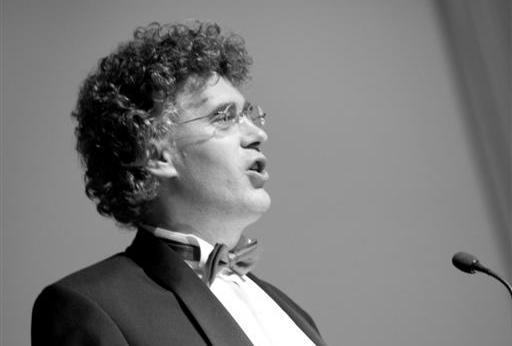 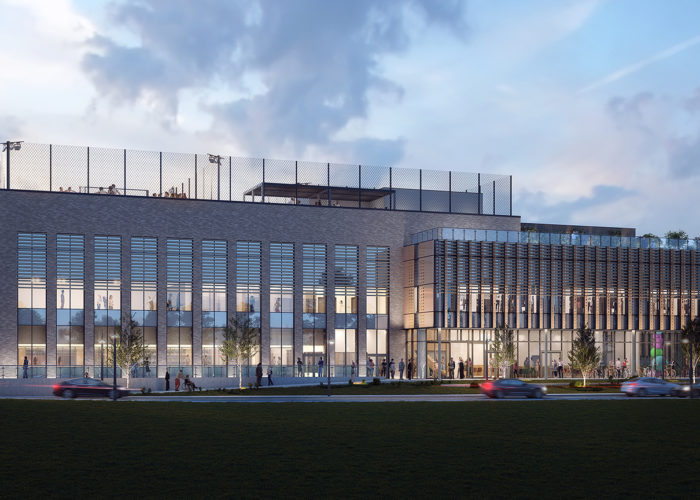 Back to Results
We use cookies on our website to give you the most relevant experience by remembering your preferences and repeat visits. By clicking “Accept All”, you consent to the use of ALL the cookies. However, you may visit "Cookie Settings" to provide a controlled consent.
Cookie SettingsAccept All
Manage consent